Do you want to be a billionaire?

In order to analyze person’s finances, his/her limits, money from personal commitment (work), inherited money or money gained in any other way, in a general analysis of natal chart, we will certainly (if we know the time of birth) look at the positions of the following astrological fields or houses.  The second house, the sign at the top of the second house, dispositor (ruler) of the second house…will describe money gained by personal effort or work.
The eighth house, the sign at the top of the eighth house, as well as dispositor of the eighth house will describe money of other people, inheritance, partner’s money, etc.
The position of Taurus in natal chart will additionally describe the topic from which money “activates”, where is money coming from, what is it spent on (for instance, Taurus in the 5th house could indicate the money you earn in high school period, money we earn in youth, through children, lovers, sport, hobbies, etc.). In further analysis Mercury depicts thoughts, intentions, payments, ideas. It is the natural dispositor of work (Virgo), and whatever we do, or expect money from, we will look at Mercury.
Venus, as a natural signifier of Taurus, and the house of money, will describe how a person can make income through the position in the sign, aspect, house, etc.
Venus also symbolizes small gifts, smaller amounts of money, etc.
Jupiter will represent larger sums of money, expansions and foreign currency.
Pluto gives extremes in any case, so compared to Uranus that would bring larger rise and fall, Pluto drives you from the bottom to the top, gives everything or nothing on every plan, including finances, rules, tycoons, moguls, etc.
The last degrees of watery signs also symbolize larger sums of money.

There is also the chart of “PROPERTY” or the horoscope of finances, wealth.

Let us take the example of Carlos Slim Helú. The king of telecommunications was born on January 28th 1940 in Mexico City, time of birth unknown.
Mercury is in the sign of Aquarius and will signify the interest for new ways of technology, stock market, engineering, innovator’s spirit, etc.
Dispositor of Mercury, Uranus in Taurus, forms sextile with Venus and indicates profit from “good idea” (Aquarius) and interest, as well as great intuition to feel the moment and react. Pluto and Jupiter build (generational) trine, Pluto enters opposition with Mercury. All agents are included. As a ten-year-old boy Carlos used to sell soft drinks and snacks, and at the age of 12 he bought first shares in the Mexican bank. Today, being 72, his wealth reaches 69 billions of dollars. A general analysis without tops of the houses follows, just to warm up for the given topic.

Bill Gates was born on October 28th 1955 at 10 PM in Seattle (WA), USA. Mercury in 04. house in the sign of Libra indicates the need for team work, partnership or outside the house. The top in the 02. house in the sign of Leo indicates stable and regular incomes. Jupiter and Pluto in Leo in the 02. house in sextile with the Sun, the ruler of income house, signify the extreme sums of money. 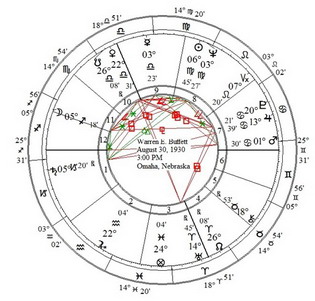 The ruler of the 8th house Uranus in the 01.house shows dealing with other people’s money, but also unpredictable expenses related to tax, etc. Saturn, co-ruler of 08. house in conjunction with Venus , and in quadrant with Jupiter and Pluto, emphasizes the same. Extreme incomes, large unplanned expenses. Together with partner (Libra) Paul Allen Bill he founded Microsoft (in 1975), and the other companies later. A lot of decisions he approved in business caused legal case. In 1998 the process against Microsoft was started, and it was ruled that Microsoft company took part in monopolization and limitation of competition and, by that, strongly broke the law. Today, his wealth is estimated to 61 billion of dollars.

By using the same system of analysis, you can estimate the wealth of the other people from the list.

There are few Arabic lots (in jyotish known as Sahamas) that will be useful when analyzing the topic of money. Arabic lot of easy incomes/gifts (Asc + Venus – Jupiter), Arab lot of big incomes (Asc + Jupiter – Pluto), Arabic lot of money (Asc + the top of 02.house – ruler of the 02.house).
It would be interesting to mention that there is a chart of “PROPERTY” or finances. In other words, we will try to demonstrate the technique of divided charts from Pars Fortuna system, the chart of money. Calculate your lot of money and first look at astrological house and the sign it belongs to, the planet ruling the lot and the aspects of the lot and the ruler (in relation to natal planets). When you have analyzed it all, set the chart. How do you do that?Arabic lot of money should be set on the top of the 01.house and by the system of equal houses, divide the circle. Cross over natal planets and try to interpret new divided chart as a small horoscope.
Third by the wealth, “Prophet of Omaha” (he promised to give 99 % of his wealth to charities after he dies).

Warren E. Buffett was born on August 30th 1930 at 3 PM in Omaha, Nebraska, USA.
Look at the chart. Jupiter conjunction Pluto. The ruler of the 02.house in the 01. and in the 04.house, Venus in quadrant with Jupiter and Pluto.
The manager of insurance company Berkshire Hathaway (insurance companies are ruled by the 08.house), Mr. Warren has Leo there and the Sun as a ruler of the 08. in the sign of Virgo in the 08.house in trine with the ruler of the 02.house Saturn in the 01.) and one of the most influential people in the USA, has the Arabic lot of property IN THE FIRST HOUSE ON 23* OF CAPRICORN 13’. This lot, in the sign of Capricorn signifies property, stable money later in life, from position and work. The lot of money is in opposition with Pluto and

Jupiter and in quadrant with Venus.
Inter alia, major owner of Washington Post, the man who still lives in the house he bought for 30.000 dollars in 1958, has the ruler of the money lot in the first house which intensifies the meaning of this lot, indicates money, property and incomes from your own work and is found in the same sign as the ruler of the Saturn lot.
Modesty?
Arabic lot of great wealth is on the 18* (devil’s degree) of Sagittarius 49’ in conjunction with Ascendant. Let’s make the divided chart. The ruler of the lot is Jupiter that is in conjunction with Pluto (insurances), sextile with Venus and in trine with Uranus, the ruler of the 02.house. It is interesting to observe the directions and transits of planets in relation to these two spots (axis).
In January 1962 Buffett earned his first million of dollars, more exactly 1.025.000 USD. Arabic lot of great wealth, according to direction, came to opposition with Pluto. Transit Jupiter built sextile (first chance) with the spot, on May 29th 1990, he officially became a millionaire. Transit Saturn in that moment stood on a lot of wealth (its ruler), Jupiter made opposition with the same, and Pluto in transit entered quintile. Transit Jupiter the dispositor of the spot of great wealth went to conjunction with Pluto.
Buffett’s wealth is estimated today to 44 billions USD, taking the third place on the list of the richest people of today.

Jovana Lučić-Gajić was born in Belgrade in 1974, where she lives and works. From 1993 until 1997 she worked as an editor of astrological show “Night with astrologer” that was aired on Belgrade radio stations. From 1998 until 2008 she taught astrology at Belgrade university “Đuro Salaj”.From 2008 until today she teaches in her school "JovanaL27".
She is the author of five collections of texts; she writes and publishes texts for magazines and has regular astrological shows on regional televisions.
She works with clients live or via Skype on Tuesdays and Thursdays.

Astrology becomes aimless if we do not find the simple everyday symbolism in it. I say simple because my job is not to fascinate someone with terminology and brainwash them with complicated techniques. The job of an astrologer is not to play the psychiatrist and analyze or listen – read every problem with no problem, comfort, give therapies, etc. My job is not to cure, but to READ the symbol and explain WHY. Astrology also does not have the purpose if there is no PROGNOSIS.
Nevertheless, the Moon is still in Aries and counts the hours until entering the sign of Taurus. Aries attacks, so to say, Scorpio defends. Taurus enjoys. And Taurus always represents the fertile soil, hills, meadows, etc.  ...read more

Is the World coming to an End?

Do you want to be a billionaire?

The story about Rasputin
written by: Jovana Lučić Gajić, the text was published in “Astrologos“ magazine No.113 (January, 2013)

Grigori Yefimovich Rasputin (Григо́рий Ефи́мович Распу́тин) was born on (January 10th, 1869 according to the Julian calendar or) January 22nd, 1869 according to the Gregorian calendar, in Siberia, in the village of Pokrovskoye, along the Tura River in the Tyumen area. The data about the time of his birth are disputable and different sources suggest a lot of different birth times. We will try to do the analysis relying on one of the suggested birth times – two hours after midnight (in any case, the time of birth has to be after the midnight).
He grew up in a peasant family, had a sister named Maria, who suffered from epilepsy and drowned in the river. He also had an older brother Dmitri, who, playing by the lake fell into it and, after the saving, died of pneumonia... read more